Africa has always been the birthplace of rhythms which have found their way into European popular music. Mali in particular has been the wellspring of intricate stringed arrangements that were echoed in the blues across the Atlantic. After a wave of 'desert blues' coming out of the African continent, arguably pioneered by the Malian group Tinariwen, we have another group of musicians from Mali, the BKO Quintet (hailing as they do from the capital Bamako), bringing an altogether different sound. The Malian members of BKO 5 are brought together by pioneering Frenchman Aymeric, who works both as the band's promoter and plays a full drum kit in the band. Together, this quintet both raised the roof and shook the ground of Norwich Arts Centre on the 4th of December.

Walking into the venue, I was first greeted by the support act - the soothing story-like singing of Sefo Kanuteh. A Gambian man living in Norwich, much of his time is spent collaborating with other Gambian musicians, but he has put in some appearances in local venues such as The Blueberry and played in the Norwich Arts Centre two years previously. He has also done children's workshops in Colchester Arts Centre and collaborated with local artists. Sefo Kanuteh is Griot by ancestry. His class of people (as Griots are considered a certain class in the West of Africa) were previously responsible for recording and memorising the ancestral stories of significant characters - kings and their familial lines, social heroes and their actions. They would strum a Kora, a multi-stringed instrument with the body of a dried out squash-like calabash. Now, in post-colonial times, the occupation of the Griot has changed, many have become disenfranchised as royal courts were dissolved. Some were transported to America, and some of their great-grandsons would bring their inherited musical sensibility to shape an emerging art-form called rap. As is often the case, what was a social tradition began to be shaped by commercial activity. Sefo is in a situation where he is living outside of Gambia and playing both traditional arrangements, tailored to the European sensibilities (some traditional songs could go on for a whole day), and modern arrangements. One modern composition was a universal sentiment about children (Dindingolu) being the future and adults responsibility for their wellbeing, while a more traditional song was a biography praising the actions of an historical hero, Kelifa. Despite my not understanding the lyrics, Sefo Kanuteh's refined solo performance had my thoughts wandering from the sublimity of the way he was singing, the intricacies of his kora playing - along with periodic percussive interjections with his thumb - or the overall visual impression of him sat centre-stage, commanding attention, housing his electrified instrument inbetween his knees. There was a swaying silence in the crowd as the music was rhythmically enticing, riding the cusp where the gravity of story and uplift of song meet. One could not help but soak it all up and reflect. Look for Sefo Kanuteh on Bandcamp, and his website is due to be completed this week:www.sefokanuteh.com 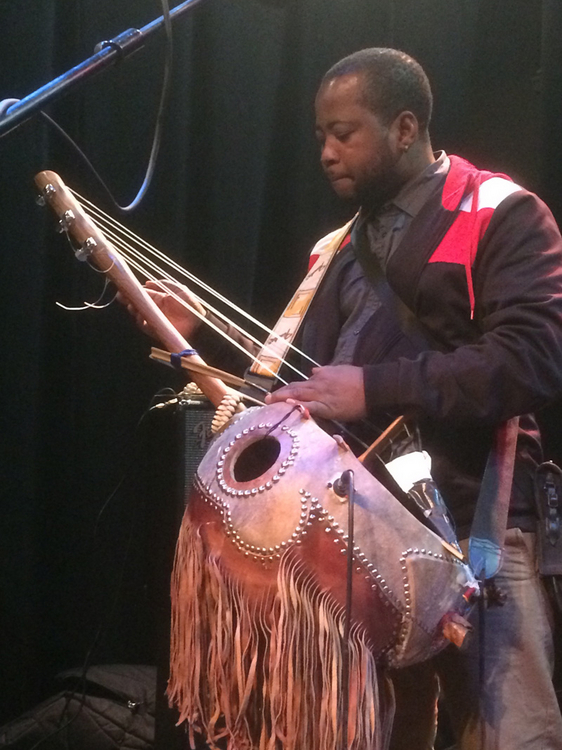 The Griot artform made a transition when it was played to various classes in Mali. Jeli was an artisan class, and contrasting this was the 'hunter' class of people, the Donson. They each have their characteristic guitar, or Ngoni. The Donson Ngoni is very much like the Kora in shape, but is a bass instrument with much deeper tones, and only 6 strings (as opposed to 20-22 in the Kora). The Jeli Ngoni, then, is a much smaller instrument, about the size of a fiddle. It appears to be less sturdy than the strap-worn Donson Ngoni, as BKO's Abdoulaye Kone has a couple of spares leaning against his amplifier, which resonates with his distorted output. Yet, for some reason - call it cultural conformity, call it a want of imagination, call it an opportunity missed - but these instruments have never been combined in one group before. Until BKO Quintet, that is. French-born Aymeric Krol, an accomplished drummer who has been involved with transnational projects in the past, was first made aware of the potential for creating something truly innovative by combining the two traditions in 2012, when the explosive Djembe player, Ibrahima Sarr, asked why these traditions did not merge. However, the coup d'etat that year led to a deteriorating security situation which proved a barrier to exploring the possibilities. 2013 saw the group come together and tour in Tokyo, and 2015-2016 has seen them tour Europe twice. Norwich proved to be the last performance in this, their first tour to the UK. And what a departure.

The Quintet is a unique combination of musicians with international presence. The front-stage performers wear distinctively Malian dress, with the Donson Ngoni player, Nfali Diakité, sporting a hunter's head-dress and robes adorned with skins. The drummers Ibrahima and Aymeric hang back in trousers and t-shirts. Frontman Fassara Sacko is positively ecstatic both in voice and posture. It seems nobody can enjoy the music more than him, and his enthusiastic gyrations have a contagious effect on the audience. His voice is magisterial, reaching long, strong incantations at points that seem almost operatic, and he adds metronomic percussion by way of a bell and striker, which he works to trance-like effect with his thumb. Behind him, then, is the determined frenzy of Ibrahima's superior djembe playing, tempered by Aymeric's more familiar and equally technical drum-kit playing. The contrasting guitars then lay on the mood, with Nfali Diakité bringing sharp bass and Abdoulaye Kone wriggling in some high-pitched electric guitar. The way his lower jaw projects out and his head swings to bring in the next strutting groove says it all: he is bringing on the funk.

The whole picture is one of innovation - electrified calabashes, distortion fed through small guitars which have been around for centuries, along with Aymeric's 'strange drum' kit (as it is called in Mali). The sound is colossal. Aymeric informs me that there is no ideology in the activity - the 'concept' is built on the merging of these instruments, played in whatever way works. And with experienced musicians accustomed to doing transnational projects, we have the foundation for the phenomenon to come. The rhythms are persistent and tightly synchronised, passing through a multitude of transitions and delirious breakdowns in a beat-laden series of compositions. Songs can go for 7-8 mins and just as it seems like the music is winding down, it steps up a gear. Repeatedly. While Aymeric spoke to me of a 'rock' feeling to the music, this is perhaps true of it's underlying premise. But with the beautifully complimentary guitar sounds and distinctive djembe rhythms, the music carries an overwhelmingly African character with it. The music exploits rock legends' habit of entering into a 'magical zone' - where the music became almost trance-like - and the audience, going along with it all, becomes an outburst of activity. Those few who want to stand and watch take their cue to move to the back, while the usual rows of people looking to the stage breaks up to form a dancing circle and enjoy each other's individual interpretations of what is an awesome ensemble. Stomping feet, waving hands and shouts of ecstasy were the hallmarks of a Norwich audience 'gone native'. And at the core is the merging of traditions - traditional lyrics and instrumentation combined and electrified. Perhaps this rethinking of tradition, and the possibilities of cohesion, is a necessary light in the fog of war that hangs over parts of Mali. For the crowd in Norwich Arts Centre, compelled to stamp and wind, the performance becomes an affirmation of life. And it is reaffirmed in the knowledge that, just as we see BKO 5 as something innovative coming from Mali, they are also seen by the Malians themselves as something innovative coming to them.