When I came across the work of Dorothea Rockburne and became aware of the possibility of creating work from the simple act of folding, I thought that delicacy and translucence inherent in her paper pieces were only achieved thanks to the nature of such a fragile material. The same happened to me with Gego’s metal meshes, which I considered to have the unique effect of paradoxically surrounding the viewer with transparency. The current Rana Begum’s exhibition at the Sainsbury Centre proved me wrong by demonstrating the different ways those qualities already explored by previous artists could be achieved too through different shapes and materials; hence, this is a show that displays a fresh approach to those aspects of impersonality, seriality, and transparency that artists such as Rockburne and Gego – as well as many others – experimented with from as early as the 1960s. 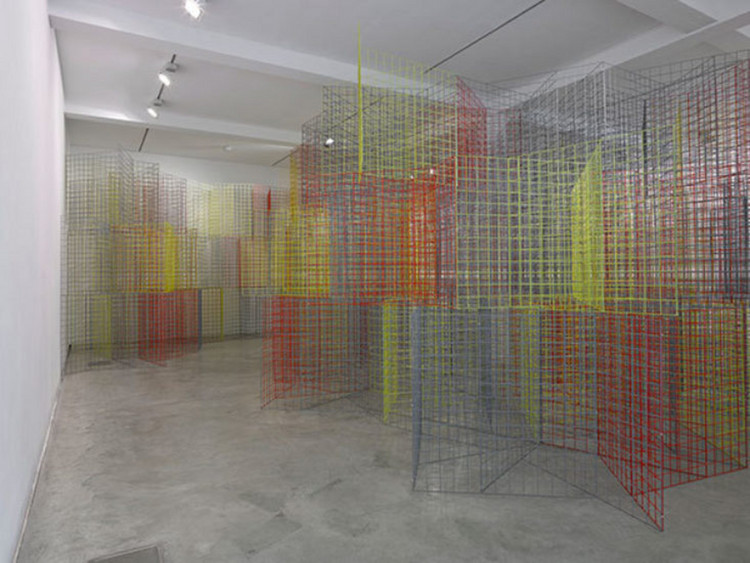 Space Light Colour shows a resistance to the idea of skill, a lack of expressive lines; it is pure and impersonal, not human, and it does not want to engage with the viewer’s emotions but with their senses and their awareness of their own body occupying a certain space – an aim made clear from the very beginning of the exhibition. Once the viewer reaches the upper mezzanine of the Sainsbury Centre where the show is held, they encounter straight away a large grid-like structure made of bright yellow, red, and grey rhythmical steel layers that blur one’s vision – it is Begum’s 2016 piece No. 670. Surrounded by this metallic network, the viewer is invited to move around and explore this structure whose grey patterns fuse with the colour of the carpet deceitfully impeding one’s way and creating the illusion of false exists from this labyrinthine construction. From the start, No. 670 states the importance of the viewer’s movement in Begum’s work and sets a colour-based vocabulary of apparent simplicity and order which one engages with until the end of the show.

As one advances, it is noticeable that the work on display is more about the elements of space, light, and colour that compose the title of the exhibition and less about this Bangladeshi artist based in London. She explains that her art is not about herself, she is not looking for the viewer to respond to her but to the colour, light, and form of her minimalist productions.1 Her work does not only show any individuality of touch at all, it also lacks possible traces of gender or culture and stays fully neutral, which she emphasises by numbering her pieces as they are created rather than giving them a title. The exhibition seems to strengthen this dryness of expression by not even providing labels for the visitors. This makes them focus only on what is happening in each work and their effect on one’s perception such as through the appearance of colours that are not physically there but that emerge from the interaction of the other existent shades, as it happens between the vertical bars of No. 480 (2016) and No. 529 (2014). 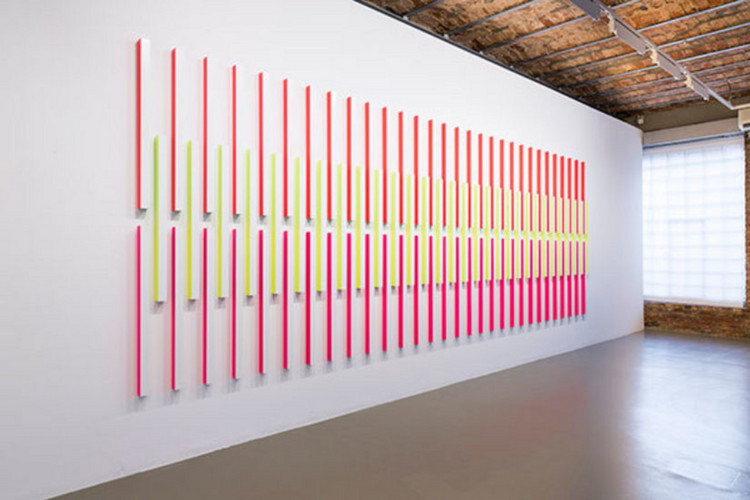 Despite the very limited number of works on display in an even more limited space, and although this space could have been better used by not showing so many maquettes of her architectural works – which one cannot properly engage with as much as with the pieces shown in their original scale – this exhibition manages to make visitors truly familiarize themselves with Begum’s serene aesthetic, her industrial colour codes, and her fusion of painting, sculpture, and architecture. Surely, the show does not overstate the consonance between Begum’s work and the architecture of the Sainsbury Centre, as the building’s open plan and the large amount of light that the glass walls provide “activate” her works and let the materials absorb the light they need in order to reflect the colours back. In short, despite the brevity of this exhibition, it brings together a kind of work that deeply stimulates the senses and makes one leave the gallery with an intense awareness of such ethereal and powerful element as light is.